Geneva, Switzerland, October 18, 2016 – Firmenich was honored to receive the PRIMADUTA Presidential Award from the President of the Republic of Indonesia. This annual award recognizes international companies which contribute to the Indonesian economy and practice the most outstanding local business leadership. With a presence in this strategic market since 1974, Firmenich was recognized for its longstanding business excellence in Indonesia, grounded in strong local business ties and commitment to responsible and sustainable growth.

“I am proud to bestow this award on Firmenich for their excellence in business and their historical commitment to making a positive impact in the region,” says Mr. Enggartiasto Lukita, Minister of Trade of Indonesia, speaking on behalf of President Joko Widodo. “Not only has Firmenich been creating economic opportunities in the region for over four decades and investing in manufacturing facilities, but the company has also brought significant social value through its responsible sourcing programs, in particular working with patchouli smallholder farming communities in Java to ensure their sustainable livelihoods.”

“We are very humbled and grateful to the President of Indonesia for honoring Firmenich with this prestigious business distinction,” says Gilbert Ghostine, CEO, Firmenich. “It recognizes 42 years of consistent investments in Indonesia to build stronger relationships with our local customers and winning solutions for their consumers. Building on Firmenich’s legacy of responsible business, I am proud that our responsible sourcing of patchouli, in close collaboration with our partner Indesso is making such a difference in the region.”

Committed to the sustainable sourcing of its natural ingredients, Firmenich leads a local responsible sourcing project for patchouli in Indonesia alongside its partner Indesso. As part of its Naturals Together initiative, this project is working to shape the future of patchouli in the region as well as secure sustainable livelihoods for the local smallholder farmers at source. Through Naturals Together, Firmenich sources 150 natural ingredients and positively contributes to the lives of 250,000 farming families around the world. To learn more about our partnership with Indesso for the responsible sourcing of patchouli, visit: Firmenich.com/NaturalsTogether

In 2013, Firmenich inaugurated a state-of-the-art Flavors manufacturing site, near Jakarta. The facility is dedicated to the production of the company’s proprietary encapsulation technology, Durarome® and supports the needs of its Flavors customers in Indonesia and across South East Asia. Supporting Firmenich’s global strategy to invest in high-growth markets, this facility has allowed Firmenich increased intimacy with its customers in Indonesia and broader region. 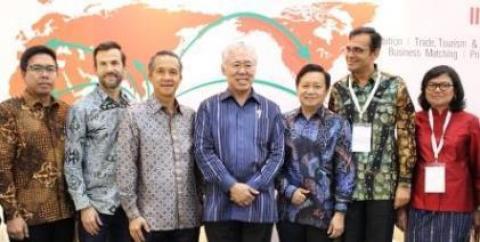