Madrid, November 16th, 2017 – Firmenich is proud to announce that Alberto Morillas, Master Perfumer, has been inducted into the Academia Del Perfume Foundation in Spain alongside leading Spanish Fragrance Industry experts. Alberto had the great honor of accepting the prestigious recognition on behalf of all of the perfumers in attendance at the ceremony held at the Royal Academy of Fine Arts of San Fernando in Madrid.

“Spain and my home town Seville are true inspirations for me, across my creations every day. For instance, I try to render the experience of freshness from the Mediterranean Sea in the heat of the summer across all of my aquatic fragrances,” said Alberto Morillas, Master Perfumer, Firmenich. “I am sincerely touched by this prestigious recognition and would like to thank the Academia Del Perfume for celebrating the art of Perfumery.”

“Alberto is one of the greatest perfumers in the world,” said Armand de Villoutreys, President of Perfumers & Ingredients, Firmenich. “Through his artistry he has shaped and left an indelible mark across the perfumery landscape, having signed some of the world’s most iconic fragrances.”

Academia Del Perfume was originally founded in 2007 and today is the leading Fragrance industry association in Spain, organizing annual fragrance awards and industry events in collaboration with the Spanish Association of Perfumery and Cosmetics. As an artistic and cultural pillar in Spain, this year the Academia Del Perfume inaugurated a new foundation under the patronage of Juan Pedro Abeniacar and honors three categories of leading cultural figures, including perfumers.

Alberto’s life is dedicated to Fragrance creation. Raised in Seville, he was encouraged to develop and explore his inquisitive nature from his earliest days. While Alberto’s heart belongs to Andalusia, his life’s work brought him to Geneva where he began his studies at the School of Beaux Arts, before joining Firmenich in 1970 at the age of 20, where he entered and grew in the world of Perfumery.

Over the course of his career, Alberto has been recognized by the industry and his peers with countless awards and distinctions from The Fragrance Foundation in New York awarding him the first ever Lifetime Achievement Award in 2013, to Perfumer of the Year in France by CosmetiqueMag in 2013 and le Prix François Coty for Best Perfumer in 2003.

To learn more about Alberto Morillas, please watch his video portrait below:

Firmenich is the world’s largest privately-owned company in the fragrance and flavor business. Founded in Geneva, Switzerland, in 1895, it has created many of the world’s best-known perfumes and flavors that billions of consumers enjoy each day. Its passion for smell and taste is at the heart of its success. It is renowned for its world-class research and creativity, as well as its thought leadership in sustainability and exceptional understanding of consumer trends. Each year, it invests 10% of its turnover in R&D, reflecting its continuous desire to understand, share and sublimate the best that nature has to offer. Firmenich had an annual turnover of 3.34 billion Swiss Francs at end June 2017. 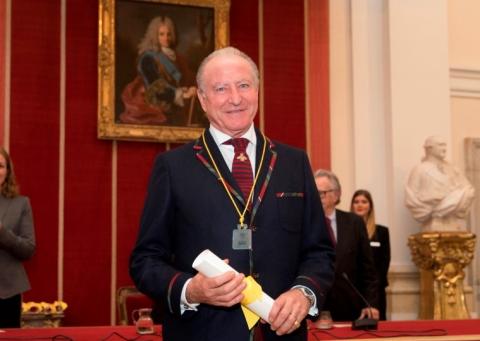