Geneva, 20 June 2012 - At the occasion of this year’s World Perfumery Congress, held in Connecticut, USA, Firmenich, launched its celebrations marking the 50th Anniversary of its star molecule Hedione®.

When it was first launched in 1962, this innovative ingredient marked a new era in Perfumery, bringing lightness, transparency and fluidity to fragrances. Recognized by perfumers as the ‘quintessence of florals with citrus’, it sublimates fragrances, making them seem very open, long lasting and light. It was when Edmond Roudnitska used it in l’eau sauvage by Dior in 1966, that this molecule made its entry into the world of Fine Fragrance. Its success was immediate and worldwide and has been on-going since then.

Inspired by Nature Recognized for their industry leadership in ingredients, Firmenich scientists are inspired by nature which they seek to copy and sublimate through their work. Hedione® was discovered through their dedication to capture the absolute smell of jasmine. Very fast, the majority of jasmine’s components were identified. However 13% of its extract remained unknown to chemists, until Dr Edouard Demole from Firmenich revealed the presence of methyl jasmonate in 1957. However, at that time, its production was very complex and expensive. In 1958, the same chemist discovered ‘methyl dihydrojasmonate’ that would later be named Hedione®, from the Greek ‘hedone’ meaning pleasure. Fifty years after its discovery and industrialization, Firmenich continues to be the world’s first producer of Hedione®.

Continuous Innovation In response to the constant innovation needs of perfumers, Firmenich scientists continue to discover and create new molecules. In the Hedione® family they launched:

- Paradisone®, an even more blooming molecule. A simple touch of it fills a room with an outstanding scent of flowers.

Other members of the Hedione® family were developed by Firmenich scientists in response to more technical needs, such as greater strength and endurance or stability for Delphone, Delphol HC® and Veloutone®. Also Firmenich now offers 6 of its specialty bases diluted in Hedione® to improve their lightness and long lastingness. 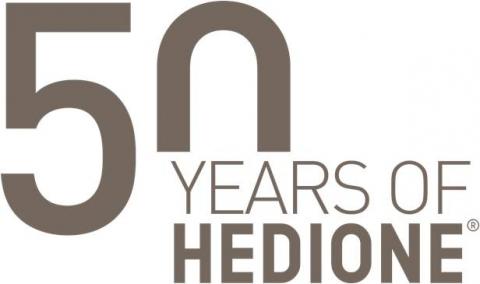