Geneva, Switzerland, November 19, 2019 – Marking World Toilet Day, Firmenich, the world’s largest privately-owned perfume and taste company, released pioneering research demonstrating that malodor control is a key lever in tackling today’s sanitation crisis. The four-country study, released at the Global Sanitation Economy Summit 2019 in Pune, India, found that effective malodor control significantly increased the use of shared toilets. Malodor was singled out as one of the top barriers to using toilets by 87% of respondents in Kenya, 70% in South Africa, 62% in India and 51% in China.

“At Firmenich we are committed to making safe toilets save lives. This pioneering study combines our world-class science of smell with our leading consumer insights,” said Gilbert Ghostine, CEO, Firmenich. “With bad smell consistently cited as a barrier to toilet use, we have clear evidence that our breakthrough malodor-control technologies can make a real difference when they are integrated into affordable cleaning products.”

“Firmenich is providing key software for the new toilet economy by taking a human-centered approach, based on our deep understanding of how positive emotions can drive behavior change,” said Dr. Berangere Magarinos-Ruchat, Global Head of Sustainability. “This tangible, evidence-based work is in line with our purpose as a responsible business advancing science-based targets.”

By engaging directly with communities in 10 low-income settlements, the study provided strong evidence of the positive impact of enhanced odor and cleanliness. Furthermore, in South Africa, 61% of those surveyed highlighted toilets as the leading concern in their settlement, ahead of issues such as security, employment and space. Smell was cited as a key reason for defecating in the open instead of in community toilets by up to 45% in India. Other key success factors identified by the study include improved infrastructure and community engagement.

Underlining the value of partnerships to solve global challenges, the study was funded by the Bill and Melinda Gates Foundation and its consumer insight methodology was co-created and executed with Archipel&Co. Working with its customers, the first affordable and sustainable toilet cleaning products incorporating Firmenich’s breakthrough malodor-control technologies were launched this year in Bangladesh, India and South Africa. These technologies were developed in the context of a four-year research partnership between Firmenich and the Bill & Melinda Gates Foundation to reinvent the toilet experience with effective malodor control solutions.

Some 4.2 billion people worldwide live without safely managed sanitation, while 673 million people practice open defecation, according to the United Nations. The numbers speak for themselves, unsafe sanitation increases the risk of disease, pollution and insecurity. 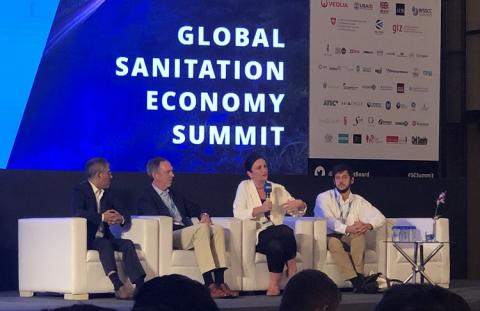