Val Díez, Executive Director of the Academia del Perfume Foundation said, “The Academia del Perfume recognizes worldwide expert and Master Perfumer Olivier Cresp for his extraordinary talent and deep expertise of the Spanish market where some of the top fragrances were created by him and have become real classics.”

“As perfumers, our work consumes us. We love the rush of excitement we experience when we’ve created something truly new – like the gourmand olfactive family – a contribution to the world of perfumery of which I am truly proud,” added Olivier Cresp, Master Perfumer.

“Olivier’s accomplishments in perfumery speak for themselves,” said Armand de Villoutreys, President of Perfumery and Ingredients, Firmenich. “He’s not afraid to be daring and bold: to test innovative ideas. And what he creates is often unique, hugely successful and timeless.”

Founded in 2007, the Academia Del Perfume is Spain’s leading organization of fragrance industry professionals. It annually honors three leading cultural figures, including one leading perfumer, and also organizes industry events such as the annual Fragrance Awards. This year’s ceremony took place at the Real Academia Espagñola in Madrid.

Olivier’s legendary body of work includes Fragrance Hall of Fame Awards for Angel by Thierry Mugler and Dolce Gabbana Light Blue. He was also awarded the Prestige Fragrance of the Year in 2017 for Yves Saint Laurent Mon Paris. He has also created best sellers such as Nina by Nina Ricci, L’Eau par Kenzo, and Paco Rabanne Black XS.

Olivier joined Firmenich in 1992 and was given the title of Master Perfumer in 2006. He has received numerous awards, notably the Lifetime Achievement Award by The Fragrance Foundation in 2018 and Chevalier des Arts et des Lettres from the French Minister of Culture in 2012. He is the second Master Perfumer from Firmenich to enter the Academia Del Perfume; Alberto Morillas was inducted last year. 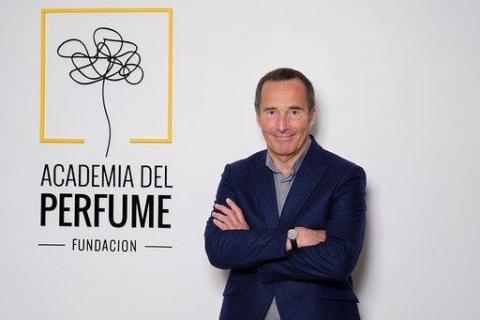